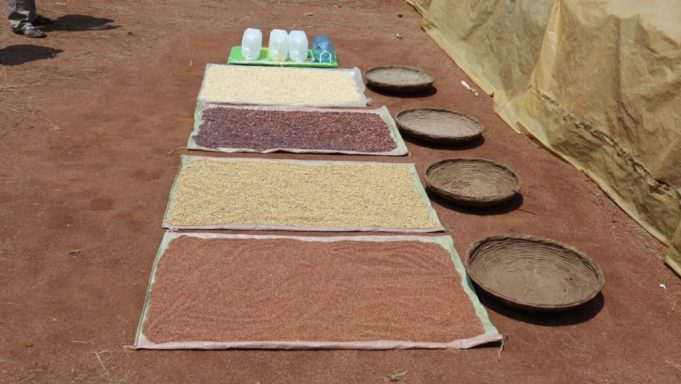 Bulechia village is located in East Wanga ward, Mumias East Constituency, Kakamega County of the republic of Kenya. This is a community with a large population of small-scale farmers relying on rain-fed agriculture. To reap maximum harvest from their crops and minimize losses, farmers have to adequately prepare for the long season with rains that begin in March and end in August, paving way for the short-season rains that start in September and end in December.

Earlier this year 15 farmers assembled at the home of Mrs. Hellen Kondoa where they were treated to inspiring lessons from Scientific Animations Without Borders (SAWBO) animations on how to prepare grain seed for planting, and storing the rest of the harvest for consumption. All Participants observed all social distancing, mask wearing, hand washing, and other health guidelines for COVID-19 provided by the Kenyan government and local regulations.

Airing the seed to dry.

The day started with farmers being taught how to dry their grains for seed using sheets of dark, clean material. They were also taught to measure the moisture content of the grain as explained in the SAWBO Post-Harvest Loss: Salt Testing for Grain Moisture Levels” 3D video. Surprisingly, this group of farmers had never heard of seed moisture testing and didn’t know it was important to producing high-quality seed. Little did they know that table salt has more functions than just sweetening their food.

In our demonstration, we used maize, beans , soya beans, and millet as displayed in the picture above. Next to the grains were the winnowing trays known as “olutelu” in our local Kiwanga dialect. The tray is made from sticks woven neatly and smeared with fresh cow dung, then let to dry. Also, in the distance are the plastic bottles and jerry cans to be used to demonstrate the storage of each grain. These 5-liter bottles and jerry cans had been cleaned with water and soap, and then aired to dry in the sun.

While the grains were drying in the sun, farmers were taken through several SAWBO animation videos downloaded on flash disk and played from the hosting farmer’s TV screen. From the Preventing Post Harvest Loss Agriculture section of the SAWBO video library, the videos animations that had been downloaded for this event included;

Since most farmers didn’t have internet enabled phones, they requested that the videos be downloaded on flash disc and memory cards to play on their TV sets and phones.

After a wonderful experience watching the informative videos in the house, farmers were taken through the process of sorting the dried grains and, selecting the best quality for storage as seed. That’s when the winnowing began as women swung with agility; blowing, picking, and separating chaff from healthy seed grains.

After the best grains were examined and selected for seed, the group began packing the seed into clean, dry 5-liter jerrycans. These containers were shaken to ensure the seed was tightly packed, filling each available space as indicated in the videos farmers had watched earlier.

After filling the containers with packed seed, a plastic sheet was placed before the lid was tightly sealed to stop air from going through the lid into the seed. Each container was labeled to indicate what seed it held and then safely stored. The farmers were reminded that it is important to indicate on the label the date the seed was packed. They were also reminded that such seed is best for planting if it’s not stored for more than six months. However, if the container held grain for food, it could be stored for much longer. The farmers were advised that once they opened a container for consumption it should be used within a couple of weeks.

Finally, One farmer, John Okoti, who had an internet enabled phone, was taken through the process of downloading the SAWBO deployer app. The SAWBO deployer app allows for easy download of all SAWBO animations. Every farmer present went home happy and excited that through SAWBO animation videos, they had been enlightened on basic and readily available ways of conserving grains for seed and eating, which they promised to practice at home. 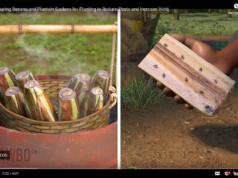 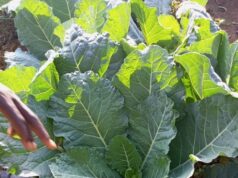 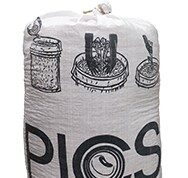 Forming Networks of Kenyan Farmers to Benefit from SAWBO Animations.

Dealing with other diseases besides COVID-19 is equally important 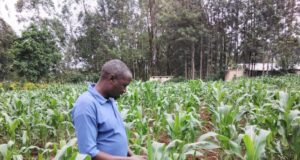 One more environmentally friendly use for the Neem tree